The Junkluggers of New Haven County 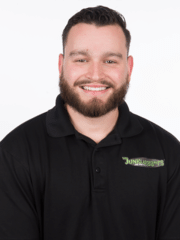 Gustavo Mesa is the Operations Manager for the Junkluggers of New Haven County. His primary responsibility is to ensure the safety of our five-star crews in the field as well as maintain 100% satisfaction amongst our customers/clients.

In 2014 Gustavo started up with Junkluggers on the trucks as an In-Home Service Professional. After falling in love with the brand, he worked his way up the ranks, eventually securing a position on the operations team, overseeing a fleet of 15 trucks and 40+ employees. While on the Corporate team, Gustavo had a hand in franchise development, assisting potential candidates decide on whether a Junkluggers Franchise was right for them.

After working with Franchisees, Gustavo had his eyes on opening his own Franchise. On April, 1st of 2017 Gustavo and his business partner purchased the Junkluggers of New Haven County. The duo went on to service thousands of customers until February 1st, 2020 when CT Basement Systems Acquired their territory.

In our acquisition, Gustavo is staying on to oversee the same five-star crews you’ve come to love over the years and continue to serve our amazing customers/clients. He can be contacted at: [email protected]

Before and after photos from jobs I've worked on:
Back to Previous Page Back to Meet The Team